He knew the value of the name

He had never been in Corless’s but he knew the value of the name. He knew that people went there after the theatre to eat oysters and drink liqueurs; and he had heard that the waiters there spoke French and German. Walking swiftly by at night he had seen cabs drawn up before the door and richly dressed ladies, escorted by cavaliers, alight and enter quickly. They wore noisy dresses and many wraps. Their faces were powdered and they caught up their dresses, when they touched earth, like alarmed Atalantas.

Joyce liked fine dining and there was no place better in Dublin in the early 1900’s than Jammet’s, which began as Corless’s in the late 1800’s. As is pointed out in the notes by Terence Brown in the Penguin edition (2000) of Dubliners, by the time the A Little Cloud was written, Corless’s had become Jammet’s but was still popularly known as Corless’s.

Máirtín Mac Con Iomaire has written extensively on the history of restaurants in Dublin and writes about the development of Jammet’s.

In November 1884, Thomas Corless advertised in The Irish Times the presence of a First-class French Cook‘ in The Burlington Restaurant and Dining Rooms, Andrew Street and Church Lane … In 1900, Michel and François Jammet bought the Burlington Restaurant and Oyster Saloons at 27 St Andrew Street, Dublin from Tom Corless. They refitted, and renamed it The Jammet Hotel and Restaurant in 1901, and it became pre-eminent among the restaurants of Dublin.

Máirtín Mac Con Iomaire, ‘From Jammet’s to Guilbaud’s’ The Influence of French Haute Cuisine on the Development of Dublin Restaurants (pages 4,5)

The Oysters that Little Chandler is thinking of, were of particular value to Tom Corless.

Corless had 700 acres of oyster beds in Clifden Bay. In 1896 Tom Corless becomes embroiled in a legal action with John N. Curtain of Ballyvaughan over a statement he issued that not a single Red Bank oyster had come into the Dublin Market since 1875. The case is comprehensively detailed in The Irish Times (2/5/1896:11), the outcome of which saw Corless lose and fined damages of £10, which was much less than the £1000 the plaintiff, Mr. Curtain originally sought.

The Emergence, Development and Influence of French Haute Cuisine on Public Dining in Dublin Restaurants 1900-2000: An Oral History (Pages 103, 104).

Joyce loved fine dining and what would now be called living it large. Joyce loved Jammet’s, as his friend Arthur Power notes:

He seemed to have a passion for an ordered life, and I thought it was a reaction from his former life in Dublin, from the poverty and bohemianism of his youth, of which one heard various accounts from people who had known him at the time. One day, meeting his friends in the street, he told each of them that they must meet him again on the following Saturday at midday at the bottom of Grafton Street with a pound note in their pockets – a matter, he intimated to them, of the utmost urgency. On the following Saturday a number of them turned up.
–Have you all got your pound notes? he asked, and when they produced the promised money he said, now let us all go and dine in Jammet’s – Jammet’s being at that time Dublin’s best known and expensive restaurant, a few yards from their meeting place. Such and other stories are told of Joyce’s bohemian youth, but in Paris he lived the most ordinary life imaginable, remaining shut up in his flat during most of the day.

Harry Kernoff painted the original Jammet’s, before the restaurant was relocated to Nassau Street in 1927. Like the restaurant, the painting moved across town. In this case to Restaurant Patrick Guilbaud in Merrion Street Upper, Dublin 2.

Jammet’s is mentioned twice by name in Ulysses. Once by Corny Kelleher towards the end of the Circe episode and once in Nausikaa episode on Sandymount Strand, when Bloom is looking at Gerty MacDowell.

There she is with them down there for the fireworks. My fireworks. Up like a rocket, down like a stick. And the children, twins they must be, waiting for something to happen. Want to be grownups. Dressing in mother’s clothes. Time enough, understand all the ways of the world. And the dark one with the mop head and the nigger mouth. I knew she could whistle. Mouth made for that. Like Molly. Why that highclass whore in Jammet’s wore her veil only to her nose. Would you mind, please, telling me the right time? I’ll tell you the right time up a dark lane. Say prunes and prisms forty times every morning, cure for fat lips. Caressing the little boy too. Onlookers see most of the game. Of course they understand birds, animals, babies. In their line.

I went for a run around the sites of the two Jammet’s restaurants, past Davy Byrne’s, probably the most famous dining place in Joyce’s writings, onto The Merrion Hotel and past Restaurant Patrick Guilbaud where Harry Kernoff’s picture hangs.

The first location for Jammet’s, Dublin’s finest French restaurant, is now home to the Swedish clothing company, H&M. And its second, interestingly, as Joyce wrote of the image of the high class whore in Jammet’s, is now occupied by the nightclub Lillie’s Bordello. 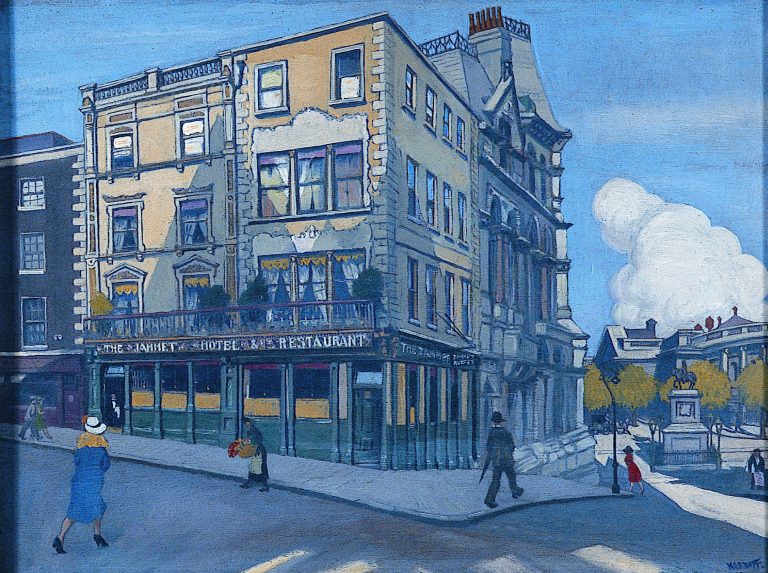 With thanks to The Merrion Hotel and Restaurant Patrick Guilbaud for kind permission to use the image of the painting of Jammet’s by Harry Kernoff.