they found the grave sure enough

—They tell the story, he said, that two drunks came out here one foggy evening to look for the grave of a friend of theirs. They asked for Mulcahy from the Coombe and were told where he was buried. After traipsing about in the fog they found the grave sure enough. One of the drunks spelt out the name: Terence Mulcahy. The other drunk was blinking up at a statue of Our Saviour the widow had got put up.
The caretaker blinked up at one of the sepulchres they passed. He resumed:
—And, after blinking up at the sacred figure, Not a bloody bit like the man, says he. That’s not Mulcahy, says he, whoever done it.

James Joyce was not the first born of John Stanislaus Joyce and May Murray. They had a son born on 23rd November 1880, some seven months after their wedding. The baby lived for eight days. Wyse Jackson and Costello say that the birth took place at home in Ontario Terrace whereas Ken Monaghan, who’s mother May was one of James Joyce’s sisters, in his book Joyce’s Dublin Family, says the boy was born in 47 Northumberland Avenue in Kingstown, now Dun Laoghaire. Regardless of the uncertainty of the birth, the baby was to be the first Joyce to be buried in the family plot in Glasnevin.

For the funeral, John bought a plot in Prospect Cemetery, Glasnevin, where he knew the Superintendent, David Malins. This was the only estate he would manage to hold on to until his own death. Glasnevin was on the northern outskirts of the city; the large graveyard there had the melancholy distinction of being ‘the Irish Valhalla’, as the burial place of, among other national heroes, Daniel O’Connell, who had helped to create it as an almost exclusively Catholic Cemetery. There were very few mourners at the freezing graveside; even the baby’s mother was not there – as it was not then customary for women to attend funerals.

Mr Bloom stood far back, his hat in his hand, counting the bared heads. Twelve. I’m thirteen. No. The chap in the macintosh is thirteen. Death’s number. Where the deuce did he pop out of? He wasn’t in the chapel, that I’ll swear. Silly superstition that about thirteen.

I have speculated elsewhere in this blog (Who was M’Intosh? December 23rd, 2014), about the man in the macintosh being a version of Stanislaus Joyce, but it was Stanislaus who noted that the impressions for the funeral scene in Ulysses must have been gathered from the two family funerals Joyce attended in the cemetery.

As Jim disliked funerals and avoided going to them , his impressions for the ‘Hades’ episode of Ulysses must have been gathered either at my mother’s funeral or at my younger brother Georgie’s. He was never in the cemetery again.

A headstone seems not to have been erected until after John Stanislaus Joyce’s death on the 29th December 1931, over fifty years since the plot was opened.

In accordance with the instructions from his father’s ghost (so the son suggested), the gravestone for Glasnevin was soon commissioned (via Alfie Bergan) from Harrison’s, who had done the arms of Dublin for the North City Markets in 1892. Bergan had heard directly from John Stanislaus that the inscription was to mention only John himself and his wife May. There would be nothing about the other Joyces in the same plot, not even poor Georgie or Baby.

James Joyce could not have attended the first burial in the Joyce family plot. He could have attended the last, but chose not to return home for it, despite being named as his father’s sole heir. One of the curious aspects of the headstone is that there is no religious iconography. The white stone is surrounded by dark headstones, complete with obvious crucifix adornments. John Stanislaus left explicit instructions that only his name, and that of his wife were to appear on the headstone. The white colour, in stark contrast to those surrounding it, may have been chosen to indicate that children were also interred, white being the traditional colour of children’s coffins. 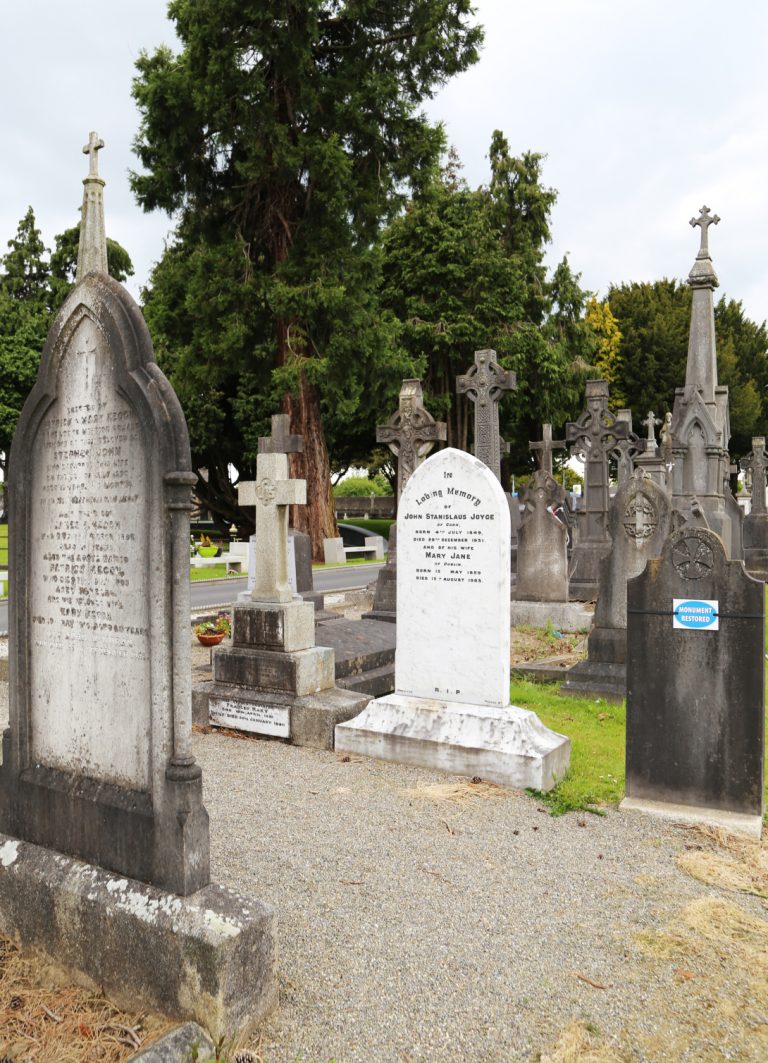