The following is a review of Ulysses, written by P.S. O’Hegarty and published in the newspaper, The Separatist. I transcribed the review from an original in the Trinity College rare Manuscript collection.

This article forms an appendix to the much longer post about James Joyce’s Houses, Why are we on the move again if it’s a fair question? that you can read here.

When, having finished the last of the 732 big quarto pages which make up this book, I closed it and began to reflect on it, my reflections were many and mixed. There was in the first place delight at a great many things in the book, its uncannily intimate portrayals of character, that superb description of the funeral of Mr. Patrick Dignan, the whole panorama of Dublin and of Dublin people: and there was in the second place a certain amount of nausea at the unnecessarily prominent display accorded to expressions of the kind of that one which appears on the first page of the Portrait of the Artist, and there was in the third place a feeling of bewilderment at much of Mr. Joyce’s method in this book, at the amount it requires of his reader. But allowing for all that, the one impression which overtopped all was this, that whatever is to be said in dispraise of certain things in the book, whatever blame it may get because of its more-than-frankness, whatever outrages it commits on the somewhat staid sheath within which, up to now, English fiction has functioned, however disagreeable a taste might be left in the mind’s mouth, it has got to be admitted that here is a big book, perhaps the biggest book that’s ever been done in English in the form of fiction. Mr. Joyce has taken English language and has used as never before was used, and used it triumphantly; he has massed it and manoeuvred it as one masses men at army manoeuvres, and done it successfully. He has taken the old decorous, staid, old English prose, broken it up completely and remoulded it into a thing which is continental rather than English. He’s put into Ulysses not a story merely, but an epoch, the comedy and tragedy of many lives, and of the people of his own generation.

I make the assertion, after reading this, that Mr Joyce loves Ireland, especially Dublin. I do not mean that it does it politically, or in any “wrap-the-green-flag” sense. But Ireland is all through him, and in him, and of him; and Dublin, its streets and its buildings and its people, he loves with the whole-hearted affection of the artist. They are to him life and love and material. Every street in Dublin he knows and remembers, and every house, and every building, highways and byeways, palaces and hovels. He may live out of Dublin, but he will never get away from it.

When one considers the frankness, the exploration of all the depths, which is the foundation of this book, one has to ask oneself this question: Is it necessary? Could the book have been done, and could it have been as big as it is, without that? That is the test. And the answer to that is very clear. It could not. It is one of the triumphs of the book that has made artistic material out of the commonest vulgarities. One can point to many places where the frankness might be softened or omitted, but one has to admit that, on the whole, it is justified, and that the two triumphs of the book, the absolutely perfect portrayal of Leopold Bloom and Marion Bloom, would be impossible without it. At the end of the book one knows those two through and through. They are familiar figures, figures who become at once classic. The last chapter in the book, a chapter of 42 pages, wherein Mrs. Bloom’s thoughts of a night are set down, just as they come, without punctuation of any kind, without any trimming, with all the inconsequence in incompleteness with which thoughts come, seems to me to be the achievement of a master, one of the really big things in modern literature. It is disagreeable, if you will, but it gets there. It reveals in that short space, the whole life and character, mind and thought, development and future, of Mrs. Bloom. There is nothing like it in literature.

Ireland at present will probably not love Mr Joyce. But Mr Joyce has done her honour. No Englishman could have written this book, even if one had the wit to conceive the plan of it. Ireland, Dublin, is all over it, its idiom, its people, its streets, and its ways, its atmosphere, and its intellectual daring. Wilde, Shaw, Moore, Synge, Joyce! Could a country produce five artists of this calibre, with certain common intellectual abilities, if these did not really represent the mind of the country? Mr. Joyce, at any rate, has arrived. Like Arnold Bennett painter in “The Great Adventure,” he is entitled to the title of Master. 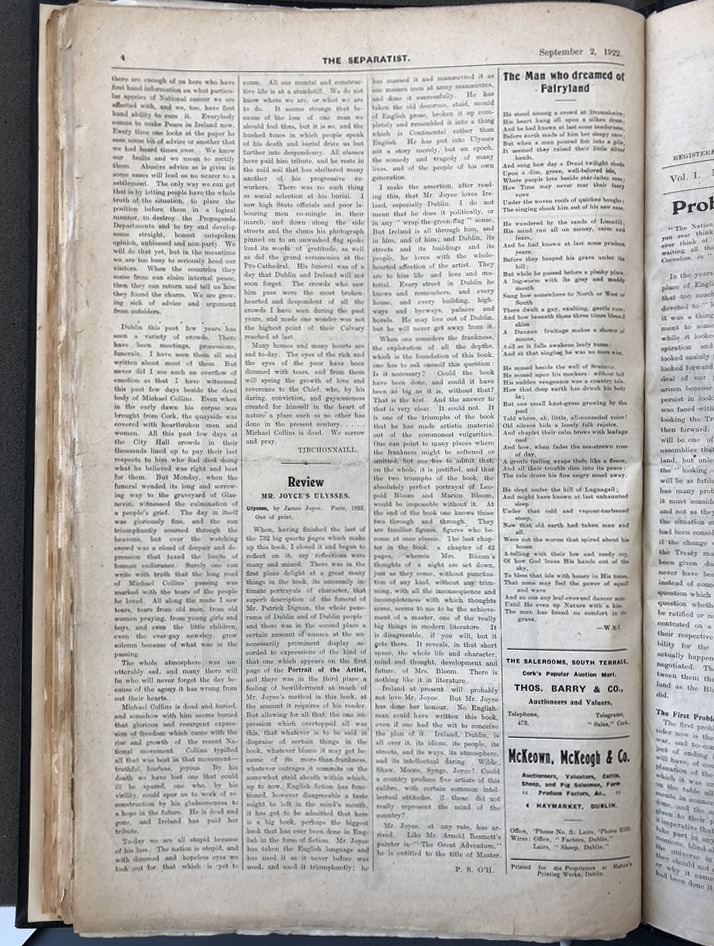 The Review of Mr. Joyce's Ulysses in The Separatist