Every boy, he said, has a little sweetheart.

A girl stood before him in midstream: alone and still, gazing out to sea. She seemed like one whom magic had changed into the likeness of a strange and beautiful seabird. Her long slender bare legs were delicate as a crane’s and pure save where an emerald trail of seaweed had fashioned itself as a sign upon the flesh. Her thighs, fuller and softhued as ivory, were bared almost to the hips where the white fringes of her drawers were like feathering of soft white down. Her slate-blue skirts were kilted boldly about her waist and dovetailed behind her. Her bosom was as a bird’s, soft and slight; slight and soft as the breast of some darkplumaged dove. But her long fair hair was girlish: and girlish, and touched with the wonder of mortal beauty, her face.
She was alone and still, gazing out to sea; and when she felt his presence and the worship of his eyes her eyes turned to him in quiet sufferance of his gaze, without shame or wantonness. Long, long she suffered his gaze and then quietly withdrew her eyes from his and bent them towards the stream, gently stirring the water with her foot hither and thither. The first faint noise of gently moving water broke the silence, low and faint and whispering, faint as the bells of sleep; hither and thither, hither and thither: and a faint flame trembled on her cheek.
—Heavenly God! cried Stephen’s soul, in an outburst of profane joy.

James Joyce, A Portrait of the Artist as a Young Man  (Page 150)

The quote above is from the closing passages of Part IV of A Portrait of the Artist as a Young Man where Stephen Dedalus walks out the Bull Wall on the north side of the River Liffey. Much has been made of the parallels between Stephen Dedalus and the young James Joyce, as well as the middle aged Leopold Bloom and James Joyce.

It is interesting to compare the quote above from A Portrait of the Artist as a Young Man with the following quote from the Nausikaa episode of Ulysses.

And she saw a long Roman candle going up over the trees, up, up, and, in the tense hush, they were all breathless with excitement as it went higher and higher and she had to lean back more and more to look up after it, high, high, almost out of sight, and her face was suffused with a divine, an entrancing blush from straining back and he could see her other things too, nainsook knickers, the fabric that caresses the skin, better than those other pettiwidth, the green, four and eleven, on account of being white and she let him and she saw that he saw and then it went so high it went out of sight a moment and she was trembling in every limb from being bent so far back that he had a full view high up above her knee where no-one ever not even on the swing or wading and she wasn’t ashamed and he wasn’t either to look in that immodest way like that because he couldn’t resist the sight of the wondrous revealment half offered like those skirtdancers behaving so immodest before gentlemen looking and he kept on looking, looking. She would fain have cried to him chokingly, held out her snowy slender arms to him to come, to feel his lips laid on her white brow, the cry of a young girl’s love, a little strangled cry, wrung from her, that cry that has rung through the ages. And then a rocket sprang and bang shot blind blank and O! then the Roman candle burst and it was like a sigh of O! and everyone cried O! O! in raptures and it gushed out of it a stream of rain gold hair threads and they shed and ah! they were all greeny dewy stars falling with golden, O so lovely, O, soft, sweet, soft! 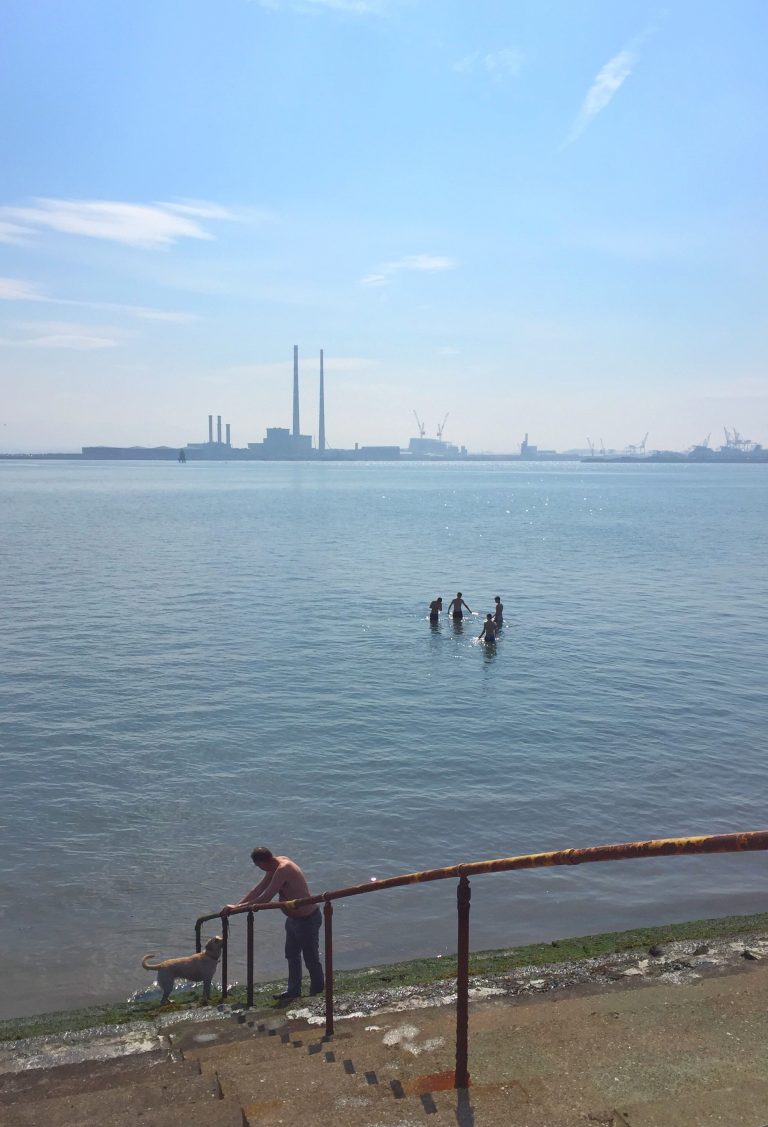 It was darker now and there were stones and bits of wood on the strand and slippy seaweed. She walked with a certain quiet dignity characteristic of her but with care and very slowly because —because Gerty MacDowell was…
Tight boots? No. She’s lame! O!
Mr Bloom watched her as she limped away. Poor girl! That’s why she’s left on the shelf and the others did a sprint. Thought something was wrong by the cut of her jib. Jilted beauty. A defect is ten times worse in a woman. But makes them polite. Glad I didn’t know it when she was on show. Hot little devil all the same. I wouldn’t mind.

The similarities of locations and scenes is striking and makes an interesting comparison. In each case the observers and observed are aware of each other. The Young Stephen sees the perfect beauty stirring the water with her foot, has a religious experience and an outburst of profane joy. The older Bloom on the shoreline on the south side of the River Liffey, masturbates onto his shirt, as the roman candle  firework explodes high over the trees behind the foreshore. And when the Gerty rises from the sand her foot does not gently stir the water, but instead she is lame and she limps away.

The quotes above are from novels. In Joyce’s second published short story, An Encounter from Dubliners there is also a sexual encounter and in this case, not with a young woman viewed by the young artist or middle aged advertising salesman, but with a middle aged man who preys upon the young boys with his own fantasies.

Then he asked us which of us had the most sweethearts. Mahony mentioned lightly that he had three totties. The man asked me how many had I. I answered that I had none. He did not believe me and said he was sure I must have one. I was silent.
—Tell us, said Mahony pertly to the man, how many have you yourself?
The man smiled as before and said that when he was our age he had lots of sweethearts. Every boy,he said, has a little sweetheart.

In these runs I try to link places  that have a relationship with Joyce’s life and writings. Hence the route runs between the two shoreline encounters, one on the north of the River Liffey and one on the South. I deliberately ran through Fairview, which is now a public park, but in the early 1900’s was mudflats, that Fr. Conmee avoided walking along, by taking the tram in the Wandering Rocks episode of Ulysses. I then headed along Wharf Road (now East Wall Road), following the route mentioned in An Encounter before crossing by the East Link bridge to Ringsend Village. In the story the narrator goes by ferry boat. The field in in An Encounter is most probably on Fitzwilliam Quay. The route also passes along the Dodder opposite the Swan River, mentioned in Finnegans Wake and past Paddy Dignam’s house on Newbridge Avenue from Ulysses.

You can see extent of the mudflats now Fairview Park in the images from www.osi.ie below

Like the young narrator of the story, I was also too tired to visit the Pigeon House, this being the first blogpost written after a layoff from injury.