A very sullenfaced man stood at the corner of O’Connell Bridge waiting for the little Sandymount tram to take him home. He was full of smouldering anger and revengefulness. He felt humiliated and discontented: he did not even feel drunk and he had only twopence in his pocket. He cursed everything. He had done for himself in the office, pawned his watch, spent all his money; and he had not even got drunk. He began to feel thirsty again and he longed to be back again in the hot reeking publichouse. He had lost his reputation as a strong man, having been defeated twice by a mere boy. His heart swelled with fury and, when he thought of the woman in the big hat who had brushed against him and said Pardon! his fury nearly choked him.
His tram let him down at Shelbourne Road and he steered his great body along in the shadow of the wall of the barracks. He loathed returning to his home. When he went in by the sidedoor he found the kitchen empty and the kitchen fire nearly out. He bawled upstairs:
—Ada! Ada!

This grim story from Dubliners focuses on the mean character of Farrington. The story involves an unhappy work and home life, drink, poverty, the pawn shop, and bullying. It also introduces Nosey Flynn in his regular haunt of Davy Byrne’s public house, and they both reappear with the much more congenial Leopold Bloom in Ulysses. Joyce finished Counterparts, the sixth story of Dubliners in July 1905 and wrote to his brother Stanislaus on the 19th July 1905, Many of the frigidities of The Boarding House and Counterparts were written while the sweat streamed down my face on to the handkerchief which protected my collar. (Ellmann, Selected Letters of James Joyce, Pages 63 and 69). The difficulties Joyce experienced with the heat may have influenced the hopelessness if the story.

The story ends in Shelbourne Road, where, according to Vivien Igoe, Joyce resided from late March 1904 to 31 August 1904. (James Joyce’s Dublin Houses, pages 97, 124). You can see the house at 60 Shelbourne Road in Google Street View by clicking here. If you rotate the view you can see the wall of Beggars Bush Barracks across the road from the house that Farrington walks alongside in Counterparts. It would seem reasonable that the home referred to in the story is the house at 60 Shelbourne Road, except that none of the houses in the terrace has a side door.

Joyce left the family home at St. Peter’s Terrace to move south to Shelbourne Road. I ran the route of the trams that went between these locations. You can see the 1910 Dublin United Tramways Company timetable on the National Archives of Ireland website here. You can browse the routes and you can read the various schedules and fares. I ran along the Donnybrook and Phoenix (N.C. Road) Line from the North Circular Road to Nelson’s Pillar, now the location of The Spire of Dublin. I continued along the route of the Nelson Pillar to Sandymount tram. I ran the original Horse Drawn Tram route which, according to Michael Corcoran began in 1872 and ran via Westmoreland Street and Great Brunswick Street, now Pearse Street. In 1901 the route was electrified and ran via Nassau Street and Westmoreland Street. (Through Streets Broad and Narrow, A History of Dublin Trams, page 140).

Farrington’s real life counterpart may have been William Murray, Joyce’s uncle. William Murray lived at 16 Shelbourne Road. These houses, built in the Piano Nobile style have a side-door at the front, underneath the staircase to the main entrance to the house on the first floor. This layout matches the description of the house in the text.

In David Pritchard’s biography James Joyce, he writes The Murray’s played a prominent role in the childhood of James Joyce, and are recalled in his stories and novels. William and Red Murray are Alphy and Joe in the Dubliners story ‘Clay’, whilst in Ulysses William is Richie Goulding and Red appears under his own name. In the story ‘Counterparts’ he used an incident witnessed by his brother Stanislaus, who heard William’s son beg his drunken father: ‘Don’t beat me Pa! And I’ll…say a Hail Mary for you…’

These are the same words that end the bleak story, Counterparts. 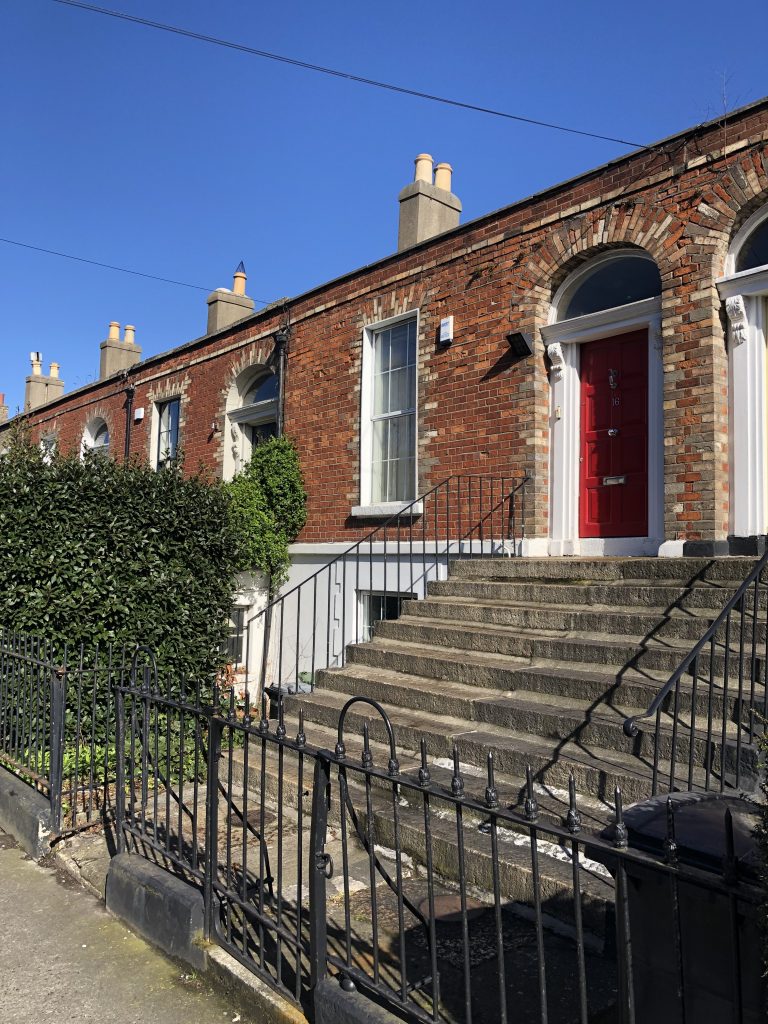