North Richmond Street, being blind, was a quiet street except at the hour when the Christian Brothers School set the boys free. An uninhabited house of two storeys stood at the blind end, detached from its neighbours in a square ground. The other houses of the street, conscious of decent lives within them, gazed at one another with brown imperturbable faces.

Joyce does not really describe the physical elements of Dublin in any detail. The quote above gives some detail about North Richmond Street, but is scant in the portrayal of the architecture or environment. Joyce’s friend Frank Budgen describes Joyce’s descriptions in his book James Joyce and the Making of Ulysses.

But it is not by way of description that Dublin is created in Ulysses. There is a wealth of delicate pictorial evidence in Dubliners, but there is little or none in Ulysses. Streets are named but never described. Houses and interiors are shown us, but as if we entered them as familiars. Not as strangers come to take stock of the occupants and inventory their furniture. Bridges over the Liffey are crossed and recrossed and that is all.

Frank Budgen. James Joyce and the Making of Ulysses (Page 68)

I wonder if, in a novel of some 700 pages in length Joyce thought detailed physical descriptions were a distraction, or would add extra text without adding to the meaning, detracting from the motion of the narrative. But perhaps as his University friend Constantine Curran alludes to, he simply had no interest in his physical surroundings.

All my student friends were devoted to the theatre; some of them shared an equal interest in painting or music. But I never once saw Joyce in the National Gallery or at any picture exhibition or heard him make any comment on Dublin painting or architecture.

He knew the streets of Dublin by heart and his memory was a map of the town. But his interest in buildings, as in pictures, was for their associations.

In her biography of Nora, Brenda Maddox writes about the upgrading of the Joyce family apartment at Square Robiac in Paris.

Their friends all crowded in for a look and privately found it dreadful. The kindest verdict was the painter Myron Nutting’s: ‘comfortable and not untasteful’. Helen Fleischman regretted that it was so unattractive and even Miss Weaver, once she had braved the ordeal of a Channel crossing to come to inspect the new settled working environment she wanted Joyce to have, found it bare-looking. To Sylvia Beach she confided the hope that the Joyces would furnish the flat more fully (although she knew at whose expense this would be done).

These critics, like most of the Joyces’ visitors, were aesthetic sophisticates who expected Joyce, as a leader of the avant garde in writing, to be equally adventurous his personal surroundings.

The Joyces’ indifference to design puzzled their friends all the more because Nora and her husband took an interest in modern music.

“I want” said Joyce, as we were walking down the Universitätrasse, “to give a picture of Dublin so complete that if the city one day suddenly disappeared from the earth it could be reconstructed out of my book.”

Frank Budgen. James Joyce and the Making of Ulysses (Pages 67, 68)

Perhaps in Joyce’s complete picture there are only people, not detailed architectural surroundings, and that is what he would recreate in his new Dublin.

And if you wonder what North Richmond Street with its brown imperturbable faces looks like in reality, here is a photograph I took in June 2015, the street little changed in its physical makeup since the story Araby was written.

Immediately to the left of the photograph, and out of the camera view is the Christian Brothers school. Edited out, much as Joyce edited out the details of his short period of education there. 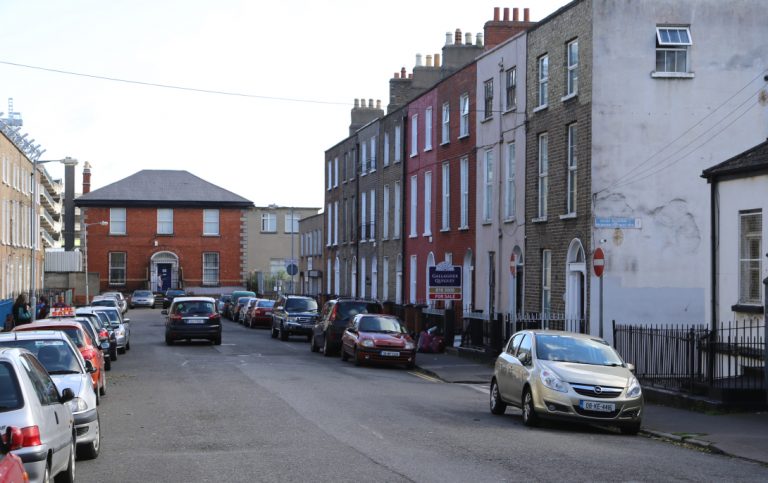