As Stephen looked at the big square block of masonry looming before them through the faint daylight, he re-entered again in thought the seminarist life which he had led for so many years, to the understanding of the narrow activities of which he could now in a moment bring the spirit of an acute sympathetic alien. He recognised at once the martial mind of the Irish Church in the style of this ecclesiastical barracks.

I went on a somewhat aimless run around the north inner suburbs and the backlands that Joyce would have walked through, and ended up going near Holy Cross College, otherwise known as Clonliffe College, which features in Stephen Hero.

I approached Clonliffe Road from Mabel Street which runs northwards from a backlane alongside the Railway embankment. There is a tree lined avenue that runs directly up to the College which is called Holy Cross Avenue.

You can see the Ordnance Survey Map reference here

You can see it on Google Street View here

The Avenue runs directly up to the gable end of Holy Cross Church which looms large over the Avenue and my immediate thought was to photograph some of the imposing facades of the ecclesiastical buildings which feature so prominently in the writings.

I read some of Stephen Hero again today and here is a quote from the section where he meets his friend Wells, who invites him into the grounds. The description sums up the impression I had as I looked through the gates from the Avenue.

Interestingly he refers to a Handball alley which I cannot see on the Ordnance Survey Maps. Will have to go on another run to see if anything is visible on the ground. 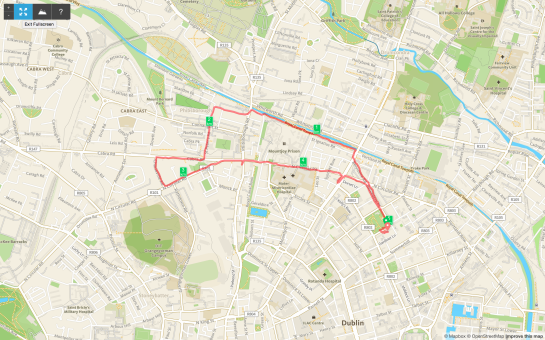 The Poem Tilly written in Dublin in 1904 and the first of the Poems Pennyeach collection, has the opening verse

He travels after a winter sun,
Urging the cattle along a cold red road,
Calling to them, a voice they know,
He drives his beasts above Cabra.

The voice tells them home is warm.
They moo and make brute music with their hoofs.
He drives them with a flowering branch before him,
Smoke pluming their foreheads.

Boor, bond of the herd,
Tonight stretch full by the fire!
I bleed by the black stream
For my torn bough!

This run was all about finding ways of ending the half marathon on the platauplain of Grangegorman, but part of it took me through Cabra and I was reminded of this poem. Joyce spent time in the house at 8 St. Peter’s Terrace which is just off the Cabra Road and would be very familiar with walks in and around the area.

If you look at the Ordnance Survey Map online here, you can see how rural the lands above the Cabra Road and again by using the slier overlay you can compare them with the built up nature of today. 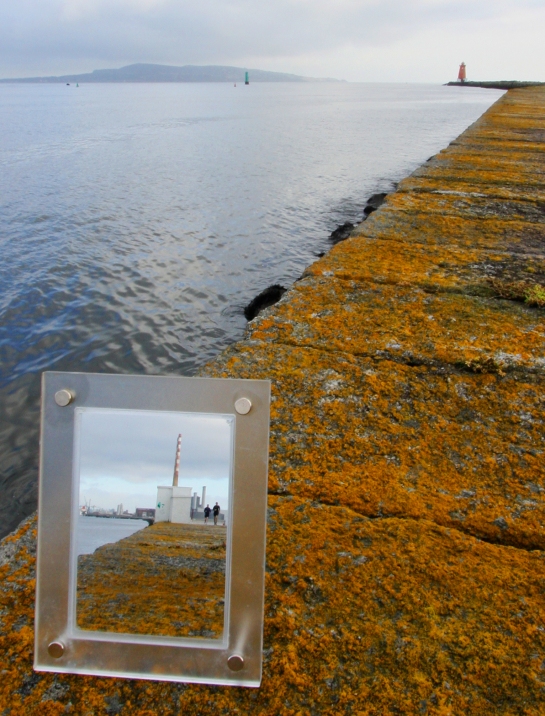 The grainy sand had gone from under his feet. His boots trod again a damp crackling mast, razorshells, squeaking pebbles, that on the unnumbered pebbles beats, wood sieved by the shipworm, lost Armada. Unwholesome sandflats waited to suck his treading soles, breathing upward sewage breath, a pocket of seaweed smouldered in seafire under a midden of man’s ashes. He coasted them, walking warily. A porterbottle stood up, stogged to its waist, in the cakey sand dough. A sentinel: isle of dreadful thirst. Broken hoops on the shore; at the land a maze of dark cunning nets; farther away chalkscrawled backdoors and on the higher beach a dryingline with two crucified shirts. Ringsend: wigwams of brown steersmen and master mariners. Human shells.
He halted. I have passed the way to aunt Sara’s. Am I not going there? Seems not. No-one about. He turned northeast and crossed the firmer sand towards the Pigeonhouse.

The shoreline at Sandymount and Ringsend have seen substantial change since the writing of Ulysses.

The land that now forms Sean Moore Park is where Bloom was originally on the foreshore in the Nausicaa episode of Ulysses. The Star of The Sea Church in Sandymount is directly across and to the South West of Sean Moore Park. When I first read the Nausicaa  episode I thought of Bloom and Gerty being positioned closer up and near the Martello Tower. This provides an indication of some of the motivations behind this blog, see changes in the City. This is probably one of the most dramatic.

You get a very good idea of the topography that existed in 2004 if you click on the Ordnance Survey Ireland Map online viewer here.

This shows the Ordnance Survey from 1907 that was published as an Ordnance survey Map in 1911. It shows the City much as it would have been on the day Ulysses is set. On the right hand side of the OSi Map viewer screen there are menus. At the bottom is a toggle marked slider. If you slide it across you can see an overlay to show the extent of the changes from the 1907 survey to the present day.

You can see an example in the video clip below, the OSi site has much higher quality imagery

You will notice on the 1911 map that a wall extends in a north eastwards direction from Chapel Avenue in Irishtown to the Dublin Corporation Main Drainage Pumping Station on Pigeon House Road. This is exactly in line with the back of the present day Ringsend Stadium. You can see it on the Google Street View image that shows an avenue where the wall once separated the South Wall Intake from the shoreline.

You can link to Street View here